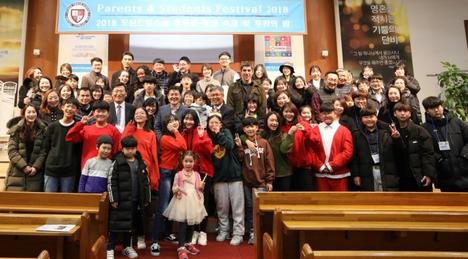 On October 9, the students of Dosan Dream International School (DDS) and their parents held a workshop in Hongcheon, South Korea to commemorate the International Day for the Eradication of Poverty. There are still many people in the world living on $1.25 a day. In fact, the poor in India, Bangladesh, and Madagascar have to live on 60-70 cents a day.

Three groups of DDS students and parents met up, and each group chose a poor country. The group who chose India or Madagascar had to make a daily diet of 60-70 cents. This cost had to include breakfast, lunch, and dinner. They realized that eating three meals a day is a serious problem for the poor as well if they have to cover rent or other utility expenses.

The students compared nutrients and prices, and they found out that the diet of the poor was seriously bad. It was confirmed that their diet cannot help anyone live a normal, healthy life. The students realized that their diet was too rich. They learned how to help the poor by reducing their own dietary costs. Daniel Songju Kim, a sixth grader, said, “Reducing my dietary costs will not affect the nutrients.” He also said, “I can save $1 per day and help the poor by donating $20 a month.”

Four years ago, Action for Peace through Prayer and Aid (APPA) also gave a presentation on this simulation at a UN headquarters event.